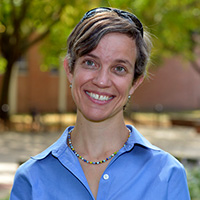 Amy Dunham Strand joined the board in 2016. She is director of the Jane Hibbard Idema Women’s Studies Center and assistant professor of Women’s Studies at Aquinas College. She has taught courses in composition, literature, women and environment, and women’s political rhetoric and has co-directed the Sister Story oral history project on the lives of women living in religious community. Her first book, Language, Gender, and Citizenship in American Literature, 1789-1919 (Routledge 2009) was the result of her research in the intersection of ideas about gender and language in American literature and culture.  Always using historical context in her study of literature, language, and gender, she has published and presented on the rhetoric of 19th-century women’s petitioning in the U.S., women’s writing instruction in U.S. settlement houses, American dialect, and Catharine Sedgwick’s writings.