On September 1st, 1887, 383 voters from Grand Rapids’s Fourth Ward nominated Dr. Frances Hillyer for the Grand Rapids Board of Education, arguing that their “schools would be better served by having some women members.” Four days later, Dr. Frances Hillyer and two other female candidates, Margaret A. Edison and Melissa E. Holden, made history as the first women to run for elective office in Grand Rapids, but they did not win their respective races. Dr. Hillyer herself lost to a Dr. Griswold by a mere nineteen votes. Although she did not exercise influence on the school board, she did play a crucial part in Grand Rapids history and has a fascinating biography.

Frances Hillyer was born in Poughkeepsie, New York, in 1846. At nineteen she married Henry Livingston Hillyer, a landscape painter. The couple lived in New Jersey and Georgia before settling in Washington D.C., where Hillyer, then a mother of two, studied medicine at Howard University. After graduating in 1877, she undertook clinical work in Washington while also taking up homeopathic medicine. Soon after, Hillyer accepted a position as resident physician for the Industrial Home for Girls in Adrian, Michigan. After one year in Adrian, Hillyer moved to Grand Rapids to set up her own practice. 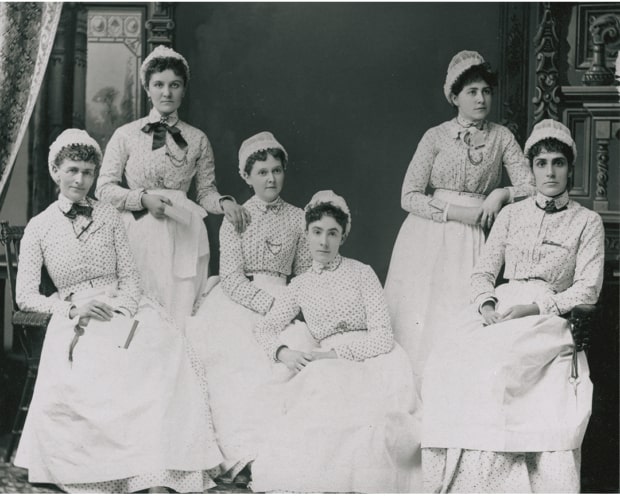 Hillyer’s professional activities were not limited to practicing medicine. She wrote articles for medical journals on cremation and cholera infantum. And she was active in various state and local medical organizations. In 1892, she was elected second vice-president of the Michigan State Homeopathic Medical Society. But perhaps her most enduring legacy in the medical field resides in nursing. Hillyer was among the primary movers for the establishment of a nurses training school at the Union Benevolent Association (later Spectrum Health Blodgett Memorial Hospital). In 1886, she and Marion Louise Withey, another founder of the nursing school, traveled to England for guidance from Florence Nightingale herself. The training school Hillyer and Withey helped found opened in 1886, training generations of nurses until its closure in 1987.

Like so many women of her time, Hillyer was active in women’s clubs, many of which offer clues about her interests in various reform issues. In Grand Rapids, Hillyer counted herself a member of the prestigious Ladies’ Literary Club and the Woman’s Christian Temperance Union. Hillyer spoke at many club meetings, and excerpts of her speeches on topics such as public education and bettering conditions for the poor were regularly printed in local newspapers.

Hillyer practiced medicine in Grand Rapids until 1905. And she remained committed to her community well into her retirement. As the U.S. entered World War I, Hillyer, at the age of seventy-one, registered for war-time service with the Woman’s Committee of the Council of National Defense, offering her services in knitting, sewing, and lecturing “whenever health permits.” Although she was not able to serve her community as a member of the Grand Rapids Board of Education, Dr. Frances Hillyer left her mark on Grand Rapids as a physician, public health advocate, nursing school founder, and war-time volunteer.

“National Pageant, Pictures of Our History to be Presented in May.” Grand Rapids Telegram-Herald, April 12, 1890.