Women Who Ran: Harriet A. Cook

On September 3, 1888, Harriet A. Cook, a respected local dressmaker, defeated her male opponent by a majority of seventy-three votes to become the first female member of the Grand Rapids Board of Education. Her 674 votes were credited to the efforts of her female supporters, who had reportedly come “out in full force.” As one local newspaper described their efforts: “teams were going constantly bringing in the voters, and every lady who could be heard of who owned anything that could be taxed, was taken to the polls.” Grand Rapids had only recently given qualifying tax-paying women the right to vote in school board elections, and the Grand Rapids women enfranchised under this limited framework seem to have been eager to throw their support behind a female candidate. 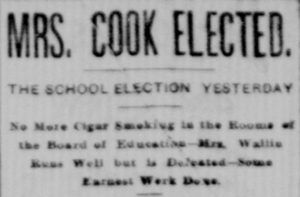 Cook took an active interest in local affairs and even served in 1899 as the ‘lady justice’ in the Third Ward’s Grand Rapids Board of Education election, where she “was able to preserve the best of order” in what was described as an ‘intense’ election. She was also active in the women’s club movement in Grand Rapids and was elected a director of the prestigious Ladies’ Literary Club. A dressmaker, suffragist, club woman, and member of the Board of Education, Cook left her mark on Grand Rapids.