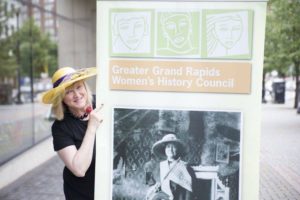 Grand Rapids native Susan Johnson Coombes majored in Communications at Michigan State University before working in local radio and moving abroad to spend time in Europe, Africa and Asia. While resident in Nigeria, she was a member, then president, of the International Women’s Association. During two years in the Netherlands, she worked as an information specialist on the Eastern Scheld Works (a storm surge barrier on an artificial island); and her fourteen years in Asia were divided between Singapore and Hong Kong, where she worked in the international public relations/communications industry. Back in the US, Coombes lived for thirteen years near Seattle and served two terms as an Arts Commissioner for the of City of Issaquah. Currently, she is retail manager for the Grand Rapids Art Museum. Coombes was first elected to the GGRWHS board in 2013 and served for four years in communications and special projects.