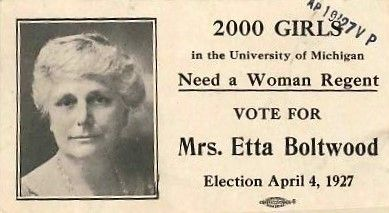 A Decade of Upheaval:  Grand Rapids Women and Public Office in the 1910s will take us back to a heady decade when Grand Rapids women in increasing numbers stepped onto the public stage. Women had long participated in civic affairs and could even run for elective office before the Nineteenth Amendment took effect in 1920. But, suddenly in Michigan after November 1918, the state’s women could run for anything—and they did. Grand Rapids women advanced beyond earlier races limited to school board seats and competed for City Comptroller of Grand Rapids, State Superintendent of Public Instruction, and, eventually, for national office. During the 1910s, which began in peace and prosperity but ended in war and pandemic, Grand Rapids women sophisticated their political game, claimed party affiliations, and carried their visions and concerns into public office.