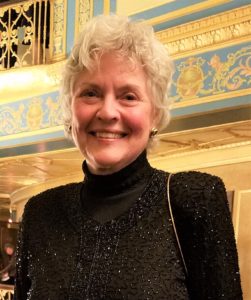 Jo Ellyn served as an officer of GGRWHC from 1993 through 1997 and came on board again in 2010. By profession a literary scholar, she added local women’s history to her research, programming, and communications efforts, tracking down the local roots of early women professionals, the early leaders of the Michigan suffrage movement, cultural historian Constance Rourke, and 1890s African American women’s clubs. Currently, she is coordinating local participation at regional conferences and overseeing an intern working to share women’s elective history in the crowd-sourcing project Her Hat Was in the Ring. She organized a centennial re-enactment of the 1899 national suffrage convention here and month-long series for Legacy, the University Club, Central High School, and Clark Retirement Community. Besides serving on the boards of the Grand Rapids Historical Society and Commission, her service extends to the Progressive Women’s Alliance, Torch Club, and local theaters. She has spoken frequently and published in news sources and magazines such as Grand Rapids Magazine and Grand River Valley History.

Jo Ellyn is passionate about her work: “Currently I seek to prove the significance of local women’s history to national narratives and to inspire ‘citizen historians’ to share documentation giving more consequence to still-inadequate accounts of American women’s history.”