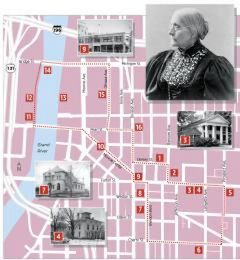 The brainchild of GGRWHC friend Marcie Beck, Legacy Landmarks: Walking with Women Who Left their Mark on Grand Rapids is a walking tour brochure produced to kick off Women’s History Month in 2010.

The brochure’s substantive annotations will guide you to sixteen sites, a selection of historical landmarks significant to women’s history in the downtown area  –  the Ladies Literary Club and St. Cecilia Music Center, certainly; but 22 Prospect? Find out why!

The LLC and St. Cecilia, with the YWCA, belong to a category of buildings originally planned and financed by women. Others were renovated. The Women’s City Club building was a derelict rooming house before 1927; and the Children’s Museum was an eyesore, having been gutted by fire in 1980. Some stops highlight buildings owing their existence to small groups of women, like the St. Mark’s sewing circle; others focus on individual women, like Nancy Mulnix Tweddale, the primary engine getting the La Grande Vitesse stabile to Grand Rapids– and don’t forget 22 Prospect!

Get some exercise downtown, learn a little about women and the history of the Grand River, and remember to honor all the anonymous women clerks, waitresses, and telephone operators who also gave their bit to our city’s downtown!

Yes, alas. Walking tours can only be so long. And, besides warning you that our 2010 brochure hasn’t been translated for high tech yet, we should also note that organizations and brochures are also subject to history, to the passage of time.

You will see none of the four sculptures dedicated to women in the downtown Community Legends Statue Project. But watch for a feature on them in a future Women’s History Wednesday! And our 2010 brochure has a little (not much!) information that is outdated. For example, the Ladies Literary Club building is no longer owned by Calvin University–and, although in 1887 it was among the first women-built clubhouses nationwide, it wasn’t the first. We know that now because the GGRWHC is dedicated to checking out such claims and, unfortunately, we sometimes have to skewer local myths!

Remind us that we need to update and expand our downtown walking tour, as well as to branch out into the city to feature many more places where women made their marks on our city. Now, start walking—and reading!