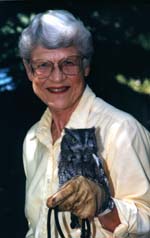 Nothing is accomplished unless somebody cares. And Mary Jane Dockeray cared enough to visualize and spearhead the building of Blandford Nature Center.

Before Mary Jane had even graduated from Michigan State University she was a summer program instructor at the Grand Rapids Public Museum. She became Curator of Natural History there upon graduation. About that time she made a conscious decision that she couldn’t handle both marriage and a career. She loved what she was doing. “It was never stagnant,” she said. Every day for 19 years she visited four schools a day educating children about birds, animals, and the environment, long before it was the fashionable thing to do. Frank DuMond, the Museum Director, gave her complete freedom. His motto was: “Learn at least one new thing everyday.” Before she knew it she had 100 different programs she was taking into the schools and the community.

When on a field trip on the West Side, she’d take students to the woods on the old Collins farm by the golf course, an area she herself had played on as a child. One spring in 1964 she saw surveyor’s stakes. Mary Jane immediately traced the owners, Mr. & Mrs. Victor Blandford, who told her they’d been thinking about donating 10 acres to the city for a park. “Really,” replied Mary Jane. That was the beginning of Blandford Nature Center with the complete support of the new Museum Director, W. D. Frankforter. Today the Center encompasses 143 acres of diverse habitats, an interpretive center, and several historic buildings. There are programs for school children and for adults, festivals, nature trails, family programs and Civil War Reenactments.

Mary Jane retired recently after a busy career. She has touched innumerable lives. In the late 50s she conducted a weekly radio program Nature Spy. She taught classes in geology and science methods for Michigan State University, 1957-79. Dear to her heart is the National Audubon Society and she used her vacation time to lecture on the Society’s Wildlife Film Series throughout the United States & Canada 1961-72. She began work on her Ph.D. in 1971. About the same time she wrote a book, Let’s Go Exploring outlining family and class field trips in the area for the West Michigan Environmental Action Council for which she earned credit toward her degree. An updated version was published in 1995.

She has received too many awards to name except two of which she is most proud: a Delta Kappa Gamma International Scholarship in 1971 toward her Ph.D. work, the 1985 Michigan Audubon Society Outstanding Member Award, and a Mary Jane Dockeray Scholarship established by friends to recognize outstanding high school seniors planning on science careers. Her professional memberships include the Michigan Audubon Society (Board of Directors), the National Audubon Society, numerous environmental, museum, and parks societies, as well as an appointed member of the 1985-88 Governor’s Wilderness & Natural Areas Advisory Board.

“If people can become better informed about the natural world around, they’ll take better care and their lives will be richer,” Mary Jane said. “It’s my firm belief that everyone literally needs to have their feet on the ground before they can make informed decisions about the environment.”