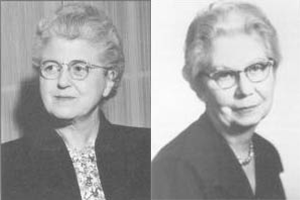 The Drs. Pearl Kendrick and Grace Eldering are justly renowned for their development of the first successful vaccine for whooping cough, an accomplishment all the more significant and rare considering the circumstances.

During the 1930’s, whooping cough claimed on the average 6,000 lives a year in the United States alone. Ninety-five percent of these deaths, moreover, were in children under the age of five years. Although the causative organism of this dread disease had been identified as early at 1906, no effective vaccine was available and the available treatment of the day was ineffective.

A microbiologist, Dr. Kendrick, born in Illinois in 1890, began working for the Michigan Department of Health in 1920. In 1926 she was sent to Grand Rapids to establish a Western Michigan Branch laboratory for the Health Department. It was there in 1932, during the depths of the Depression, that she began her research on whooping cough. In this effort she enlisted the support of Montana-born Grace Eldering, a bacteriologist, who also worked for the State Department of Health. Together they devised a program of research, conducted lab experiments, did countless field tests — all in their “off” hours as the Health Department was under-staffed and there were no extra funds for research. According to Dr. Eldering: “We collected specimens by the light of kerosene lamps, from whooping, vomiting, strangling children. We saw what the disease could do.” Ultimately they succeeded in growing pertussis (the causative) in a medium of sheep’s blood. They then began inoculating area children, carefully establishing a control group. Finally, their efforts were rewarded with a successful vaccine.

In 1940 the State of Michigan began producing and distributing the vaccine, which virtually ended the incredible toll of whooping cough deaths. Kendrick and Eldering later successfully combined shots for diphtheria, whooping cough, and tetanus into the single DPT shot, which is routinely given for prevention today. Dr. Kendrick traveled to many other countries where she helped establish immunization programs under the sponsorship of the World Health Organization.

Both women received doctorates from Johns Hopkins University: Dr. Kendrick in 1934, Dr. Eldering in 1941. Following her retirement from the Michigan Department of Health in 1951, Dr. Kendrick joined the faculty of the Department of Epidemiology at the University of Michigan, where she taught and conducted basic research until her second retirement in 1960. Dr. Eldering succeeded her good friend, Pearl Kendrick, as Chief of the Western Michigan Laboratory of the Health Department in 1951 and remained in that post until her retirement in 1969.

Both women were active in numerous professional organizations, including the American Public Health Association and the American Board of Bacteriologists. Each in turn served a term as President of the Michigan Branch of the American Society for Microbiology.

Pearl Kendrick died in Grand Rapids in 1980. Both women were inducted into the Historical Honors Division of the Michigan Women’s Hall of Fame in 1983. Dr. Eldering died in 1988 at the age of 87.