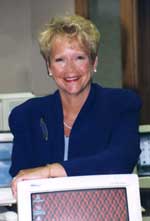 Jeanne Englehart founded Englehart Training Centers in 1985 with $5000 borrowed on her Visa card. It became this area’s premiere computer training center with a national reputation for providing training of the highest quality and expertise. In 1993 her company was named by INC. Magazine as one of the 500 of America’s fastest growing private companies. In 1997 Jeanne sold her now multimillion dollar business to an internationally recognized organization. “People have credited me with great vision,” Jeanne says. “I didn’t know what a great risk I was taking. I didn’t even think it would grow to the size it did.’

She came to West Michigan to work at Computerland as their training manager, “Working there I realized as an educator, if you’re affiliated with a retail store, you’re expected to sell their products.” Jeanne then went to Grand Rapids Community College in the Business and Industrial Division. “I realized while teaching there that business people think if you’re an academic; you don’t know business. So I saw a niche between stores and academics…training without selling.” She took a one year sabbatical and started her training center. In 1995 she expanded her business into the Productivity Point International/Englehart Training Center and built an 18,000 sq. ft. center with 11 classrooms and over 300 training courses for PC and Apple Macintosh. With the sale of the company, she became a consultant for the new owners. She also retained ownership of the facility. Building the business was exciting but scary. “I had to learn to prioritize my time between my family and my business,” she added. Jeanne was a single mother with two sons, one still in high school.

She became active in community organizations and learned the value of networking. As people helped her, she felt it important to give back to the community. She has served on the boards of the Chamber of Commerce, the Grand Rapids Symphony, the Michigan Trails Girl Scout Council, the Economic Club of Grand Rapids, the Employers Association and the YWCA. She has also become an Annual Heartbeat Fund-raiser for the American Heart Society. She was a delegate to the White House Conference on Small Business and to the People’s Republic of China with the Women in Computers and Data Processing Delegation.

She was named Grand Rapids Entrepreneur of the Year, Career Woman of the Year, National Career Woman of the Year, and received the YWCA Tribute Award – Business and Management. Currently she is Community Services Director for Congressman Vernon J. Ehlers where she is using the knowledge and the many skills she learned in building her business. “Believe in yourself and don’t know for an answer,” she advised. “When people told me I couldn’t do it, I did it. I was a woman in a male dominated business community. An important thing I learned was that I could only change what is going to happen tomorrow, that I couldn’t change what happened yesterday.”