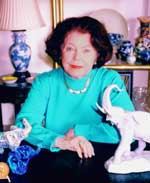 Carol Josephson was the first woman to be Chairperson of the 5th District Republican Committee in 1978. She has been chair or co-chair of every Kent County GOP phone center operation for all candidates 1970-88. She has been a delegate twice to National Presidential Conventions and met and campaigned for three Republican Presidents, Gerald R Ford, Richard Nixon, and George Bush. An organizer, charter member, president and life member of the Gerald R Ford Gap Women’s Club, she has also been president and board member of the Michigan Federation of Republican Women and a board member of the National Federation of Republican Women. Carol was cofounder and coeditor of the RAP-TAB, the Kent County GOP newspaper.

Her interest in politics was sparked when she was a coed at Cornell University. “I admired the students who participated in political rallies and who were acquainted with the candidates and their platforms,” she explained. Working her way through college, she had little time to join in, but vowed to do it someday. Shortly after Carol, her husband, and two-year old daughter moved to Grand Rapids, she joined the League of Women Voters, which was politically neutral. ” Bur I wanted to be active in the Republican Party. I wanted to work for my beliefs,” said Carol. She joined the GOP. She was appointed to the Michigan Board of Young Republicans and elected secretary. At a meeting she met Gerald Ford whose beliefs and convictions echoed hers. “I became inspired to work on his Congressional campaign.” His success encouraged her to chair campaigns for other Kent County candidates including Paul Henry. She later headed Mr. Ford’s presidential campaign in West Michigan. In addition to her political activities she was also a six-term president of Community Concern. She worked as a volunteer for the United Way and was named Volunteer of the Year, and as a professional she headed the United Way Women’s Division. The death from cancer of her only child, Patti, grown to be a teacher and a young bride, drove her to new efforts. Already a member of the Kent County Chapter of the American Cancer Society, she became a board member and a life member.

In the political arena, Carol traveled Michigan on a Women Win Elections Bus Tour in 1980 with the bonus of Efrem Zimbalist Jr. as a passenger. She attended the National Federation of Women’s Campaign Management School, which was considered the best in the country. She has had tea in the White House with Mrs. Reagan and with the then Vice President’s wife, Barbara Bush, along with other board members of the National Federation of GOP Women. One of her fondest memories is meeting Mr. Nixon for the first time at the local Lincoln Day Dinner. As Chairman of Decorations, she put a flower in his 1ape1 and told him: “You’ll be President some day!” While she has had some exciting moments meeting our nation’s leaders, she knows the value of the contributions of every volunteer and why it’s important we support our candidates. “It’s up to us to work in political campaigns,” she said, “because we can’t live in a democracy unless we work for it.”