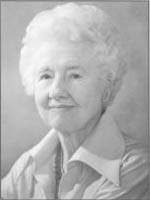 For nearly 70 years, Dorothy Judd devoted her substantial talents and energy to eliminating corruption, patronage, and “bossism” from al1 units of government. From her Vassar Col1ege graduation in 1921 until her death in 1989, Judd was a leader In League of Women Voters’ efforts to establish standards for government employment and contracts and also a primary force behind the merit-based civil service systems established by the state of Michigan and the city of Grand Rapids.

Graduation from college marked the beginning of Judd’s active crusade for better government. She joined the League of Women Voters shortly after its founding in 1919, inspired by the exhortation of its founder, Carrie Chapman Catt, to force open the “locked door of politics . . . for there is the engine that moves the wheels of your party machinery. If you really want women’s vote to count, you make your way there.” Dorothy Leonard Judd forced open that door, and once inside made sure that her voice was heard, and that her vote – along with those of all voters – counted.

Employed as a teacher of American History and Government at Grand Rapids’ Central High School until her marriage in 1922, Judd became one of the most active members of the Grand Rapids League of Women Voters chapter and was elected its president in 1926. One year later, she was elected state chair. Upon completion of her second year as state leader, Judd moved one step higher to a three-year tenure as a national director of the League. Judd had become a nationally recognized expert on civil service reform and used her national office to promote her campaign to reform government, serving from 1932 to 1934 as chair of the league’s influential Efficiency in Government committee.

Judd also worked hard to change Michigan’s laws and governmental procedures. As a direct result of her efforts and those of her col1eagues, Michigan’s voter registration laws were changed to provide for more regular updates and reviews, and to eliminate so-called “tombstone” voters from the voter rolls. Appointed to the state’s Civil Service Study Committee in 1936 by Governor Frank D. Fitzgerald, she was offered the opportunity to act as committee secretary, but declined “because I had ideas I wanted to express, rather than being merely the recorder of other’s ideas.” As a member of the study committee, she helped draft and pass the 1939 constitutional amendment creating the Michigan Civil Service. Her commitment to merit-based civil service surfaced again in 1961 during her service as a delegate to the state Constitutional Convention, when she guided a strong civil service article through the floor debate and into the final document.

Author and editor of a text on local government and of numerous booklets and pamphlets on civil service, Dorothy Leonard Judd earned the respect of government and academic leaders. Evidence of the respect she earned was her appointment by governors of both parties to the following boards and committees: Committee for Revision of Election Laws (Gov. Brucker), Civil Service Study Committee (Gov. Fitzgerald), Committee on Election laws (Gov. Williams), Civil Service Commission (Gov. Romney). In 1963, Judd chaired the State Advisory Committee to the United States Civil Service Commission.

Also active on the local scene throughout her life, Dorothy Judd was an organizer and leader of the 1949 Citizens’ Action movement that was dedicated to unseating machine politics in Grand Rapids. Citizens’ Action was directly responsible for the resignation of two city commissioners and the mayor, and the recall of another commissioner. Over a span of fifty years, Judd served on various local government committees on relief administration, taxation, capital improvements, planning, metropolitan water’ services, and civil service. She is credited with helping write the civil service rules for the city of Grand Rapids, and shepherding them through the city commission to implementation.

Dorothy Leonard Judd never held elective office, but it is no exaggeration to say that she had as much influence on the quality of government and public service in Michigan as any elected official.