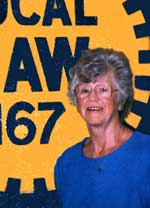 An English war bride, Dorothy Newman fought for equal representation in the United Auto Workers becoming the first woman to win the Kent County Labor Council’s Man of the Year award in 1960. She was the first woman to serve on the UAW International Constitutional Committee. She has been president of the Kent County Democratic Women’s Club and a member of the Michigan Democratic Party’s State Central Committee for many years. She was a delegate three times to Democratic National Conventions.

Her first job in the United States was with McInerney Springs in 1948, already the mother of one boy. Then when she became pregnant again, she had to quit. She became involved in the Democratic Party and went to work at General Motors as a production worker in 1954 where she joined the UAW Local 167. Dorothy became a union activist in 1956, the year she was named a trustee of the Kent County Labor Council. “I thought if you were asked to work, you put your heart and soul into it. I wanted to better our lot,” she said. In the early 1960s, she was a key voice in the movement to put a woman on the executive board of the UAW, to equalize the representation in this male dominated organization. “I also developed leprosy when I did that,” she commented. Then in 1966 she became the first woman appointed by Walter Reuther, UAW president, to serve on the UAW International Constitutional Committee and helped elect the first woman on the UAW Board. She has attended every UAW National Convention since 1962, ten times as elected delegate from the local and four times as distinguished guest. “I just kept working away and winning elections,” Dorothy said. “I think it was because I was a pest. I was persistent and consistent. We (the women) were doing the work, but for years never got top spots. We wanted to be treated as equals.” She was chair of the Local’s Women’s Committee and Community Action Program Committee (CAP) and in 1978 elected chair of the Kent county UAW-CAP Council.

During her years at GM, the Democratic Party, and the UAW, Dorothy fought not only for equal representation, but for personal leaves of absence and for more political power for women. In 1970 she won the first Kenneth Robinson Award for her work with the United Way. She won four awards from GM for her community service work with the UAW, the YWCA, and the Women’s Resource Center and was honored with the 1994 Legacy Award for Women of History. In 1985 the UAW commemorated its 50th anniversary and awarded Dorothy a medal as the outstanding woman in Region 1D. In the same year Local 167 named a conference room after her and she joined the staff of the Michigan State AFL-CIO where she became the Director of Special Projects. In 1988 at the Women’s Conference for Union Activists she became a force in developing programs to spur people to buy union and to buy American, a cause in which she is still engaged. She is also currently involved in the political concerns of Social Security and Health Care. “Get active in the issues that are important to you,” Dorothy advised. “Everything is different now. I wouldn’t have to quit now if I got pregnant. It’s all covered according to our UAW contact. I feel really good about what we did.”