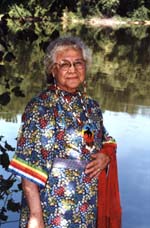 Jeanette St. Clair was instrumental in bringing federally funded education dollars for Native Americans to the Grand Rapids school system. She then became coordinator of the program for over 500 students of Indian heritage including Chippewa, Sioux and Cherokee. As a counselor at Central High School in the early 1970s and the only Native American teacher is the entire school system, she was disturbed by the high dropout rate among Indian students. She felt their lack of identity in the “white” schools, the disillusionment of their being different and she decided to get the funds to help them develop a positive self-image and to learn about their own culture. “We don’t give a second thought about who we are until someone makes fun of us,” she pointed out.

She herself had experienced the same bewilderment and the prejudice of peers and adults as she grew up. But this seemingly quiet, sometimes almost passive woman was determined to be in the ten percent of Native Americans who become college graduates. It took her 13 years to earn her Bachelor’s degree while working full-time. In 1977 she added a Master’s degree from Michigan State University in just one year so that she could administer the new program. She achieved her goals with the support of her loving husband who took care of their home and two little girls. With the government grant she established a special summer school program exclusively for Native American students which taught English, math, and Indian crafts with field trips exploring the local area.

Jeanette also became active in the Grand Rapids Roman Catholic Diocese Kateri Circle, a Native American group which also helped Indian families moving into the area and which successfully combined Christianity with the Indian culture. She sat on the Social Justice Board for the diocese dealing with 11 counties, she was active in the United Way Blueprint Steering Committee which sought minority representation on other UW agencies, and she was a member of the Gerontology Network Board. In 1996 she was honored during the Women’s History Month for her exemplary work in the Native American community. By being a positive role model for all who know her, with her patience and her persistence in attaining her goals to help all her people, Poma-ge-we-mo-kwe, (Jeanette’s Indian name meaning Lady of the Winding Stream), has stilled prejudice and has instilled pride in all those around her. “We have word in Ottawa, anishnobe, which means human being,” Jeanette said. “We’re all anishnobe.”