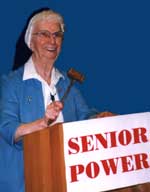 Sister Agnes Thiel was the designer and first Director of the innovative Emeritus Program of Aquinas College, opened in 1975, which offers a variety of noncredit courses to those who wish to learn for the joy of learning, primarily directed toward seniors. This center was established after she retired from 40 years of teaching as a Grand Rapids Dominican Sister with a B.A. degree and two M.A. degrees. “I’m enjoying my retirement, my Third Age, much more than my Second Age,” she stated. Sister Agnes defines the Third Age as the years that follow after full time jobs or careers cease. This phase of life can last for 20, 30, even 40 years. “I’m as busy as I want to be. I can say yes or no to daily choices,” she explained. Just after she retired Sister Agnes tried working one on one with the elderly and then as Coordinator of Pre-retirement Services at Aquinas. Not satisfied, she visualized helping large numbers instead of only a few at a time. She realized that one of the best defenses against aging was to keep the mind active. It was then that she conceived of the idea for Emeritus Center where students never graduate because they are never finished learning.

In 1977 she assisted in founding the Council on Aging in Kent County. She became an intern in Representative Hal Sawyer’s Congressional of lice, and in 1981 was elected a delegate to the White House Conference on Aging with an agenda which emphasized changing the image of aging, an image which she was already bending into new, brighter shapes. When she returned, she wondered hoe the voices of the seniors could be heard. She founded the Senior Senate, which represents 60 senior organizations in the area to consolidate senior advocacy for local, state, and national governments. She was appointed to the Michigan Senior Advocacy Council in Lansing, which sponsored annual Senior Power Day, for which she was elected chairman three times. During this yearly celebration, a platform of senior needs was presented to the Governor and State Legislature. She also initiated Monday Morning Coffees attended by citizens and lawmakers to, “to get people talking with our legislators.”

She is a recipient of many honors and awards including the Grand Rapids JayCees Women’s Association Woman of the Year, the Senior Power Day Michigan Heritage Award, the United Way Volunteer of the Year Award, the YWCA Tribute Award – Advocacy, and the 1997 Grand Rapids Chamber of Commerce Volunteer Leadership Award. She was appointed by Senator Levin as a delegate to the 1995 White House Conference on Aging. Her aim is to develop a new image of the older American. “We are the first generation of older people – pioneers- to carve out new roles for ourselves and others, to strive to make our own distinctive contributions about issues and policies so we can act and advocate for ourselves and for others,” said Sister Agnes Thiel. “Our positive attitude toward living is very important. In order to keep on going, we must continue to develop mentally, physically, socially, and spiritually.”