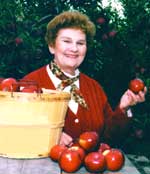 It was the early 1970s, a time when women were just testing their power. JoAnn Thome, along with several other apple grower wives, donned white gloves and stopped produce trucks from delivering to an area apple juice processor, one of many paying less for the growers’ apples than the cost of production. The women also lobbied the state legislature to pass Public Act 344, which allowed commodity groups such as the apple growers to negotiate prices. “We were supporting family farm issues which our husbands didn’t have time to do,” said JoAnn. “I think also we were brave enough that we tackled things that the men thought impossible.”

JoAnn and three others, Pat Cohill, Sharon Steffens, and Joan Hill, organized the West Central Chapter of Women for Survival of Agriculture in Michigan. This organization became a catalyst in forming a coalition of farmwomen around the country. JoAnn was then appointed to the Michigan Apple Commission by Governor Blanchard, which led to being the representative to the International Apple Institute (IAI), a trade organization of over 650 segments of the apple industry, including 9000 apple growers in 36 states and 20 countries.

JoAnn was born a city girl who was educated as a pediatric nurse. She married Harold Thorne and went to live on his fifth generation family farm where they raised four children and she channeled her skills into becoming financial manager of the farm and into community activities. To increase her financial knowledge, she earned a bachelor’s at Aquinas in Business Administration in 1985. In addition to handling the bookkeeping and payroll, JoAnn fought for a day care progran1 for the children of the migrant workers who pick the fruit in the area. “I believe in education,” she explained. “It’s the only way people can move ahead in life.” This was one of the reasons she ran for the Kenowa Hills School Board and served for 10 years, two years as president. She was appointed to the Alpine Township Planning Commission and was Chairperson for two terms, during which she held fast for the preservation of agricultural lands.

She and husband Harold were honored as Apple Growers of the year in 1992 by the American Fruit Growers magazine and also interviewed on the CBS morning show. “I was doing what needed to be done,” JoAnn said. “I learned that farm families have to work together to have power.”