Rosedale Memorial Park is a privately owned, nonsectarian cemetery. Founded in 1927, its one hundred acres bear witness to its initial plan as a park-like setting. Over time, however, sections have been developed to include dedicated gardens honoring veterans, lawn crypts, and mausoleums. It is located west of the Standale section of Walker, Michigan, itself the western-most suburb of Grand Rapids.

At 50 Lake Michigan Drive, it is a few blocks west of Wilson Avenue on the south side of the road. To find the grave of Emily Burton Ketcham, it is easiest to use the entrance at the light for 1st Avenue, coming from the north. Continue straight south into the cemetery—round a grass island and continue south a very short distance. The site is very low to the ground, but will be on the left in section Grand Lawn A. The map here illustrates that it is directly across the road from a split, dying tree.

North is to the left on the following map, Lake Michigan Drive. 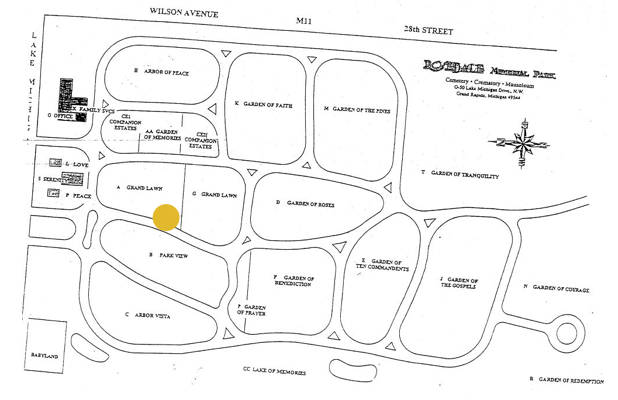 In 1907, upon the death of Grand Rapids native Emily Burton Ketcham, the president of the National American Woman Suffrage Association, Anna Howard Shaw, called her “the greatest worker that Michigan ever produced.” Newspapers around the country recounted the import of Ketcham’s life and work in extended tributes. The Woman’s Tribune of Portland, Oregon, said: “whether president or private, her fealty, her energy, her executive ability always made her the mainstay of her coadjutors.” Nevertheless, Ketcham became so thoroughly forgotten in Grand Rapids that even her local descendants knew little about her history.

By 1999, the centennial of the suffrage movement’s national convention in Grand Rapids, much had been rediscovered about Ketcham’s life; but the location of her burial site remained a mystery. Great-great-granddaughter Esther Ketcham Visser had found nothing about her illustrious ancestor by digging through records and cemetery receipts. Then, her mother Margaret remembered a colorful family story.

Margaret’s mother-in-law had become tired of living with Ketcham family urns on her mantelpiece; but the nation was in the midst of the Great Depression, and cemetery plots were expensive. As the story goes, she sneaked Emily’s and her husband Smith’s ashes into the casket of their son, Harry Burton Ketcham, when he died in 1937. On a beautiful August afternoon in 2001, we found Harry’s grave in Rosedale Memorial Park. His bronze marker does in fact list two other names: those of Emily and her affectionate helpmate and political support, Smith G. Ketcham. 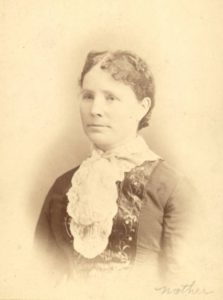 Emily Burton Ketcham (Grand Lawn A, Lot 5) 1838 –1907  was born in 1838 Grand Rapids, under a Michigan constitution allowing only “white” and “civilized” Indian males to vote. For over thirty years, she worked earnestly in the suffrage movement on local, state, and national stages; and during the first Michigan campaign in the early 1870s, Ketcham developed a lasting friendship with Susan B. Anthony. At Ketcham’s 25th wedding anniversary in 1892, Anthony turned it political by standing in the receiving line. Four times the president of the Michigan Equal Suffrage Association, Ketcham hosted four of its conventions in Grand Rapids and often represented the state at National American Woman Suffrage Association meetings. In 1899, on the strength of Ketcham’s organizational prowess, Susan B. Anthony brought NAWSA’s annual convention to Grand Rapids for only the third time it had ever met outside Washington, DC, and for the only time it ever met in Michigan. Less than a year after Susan B. Anthony’s death in 1906, her long-time friend Emily Burton Ketcham also died before universal suffrage had been achieved. Claiming that Ketcham’s death at 68 was catastrophic, NAWSA president Anna Howard Shaw eulogized her: Ketcham’s “loss to the state is a great one, and there does not seem to be anybody to take her place. To my mind she was the greatest worker that Michigan ever produced.”