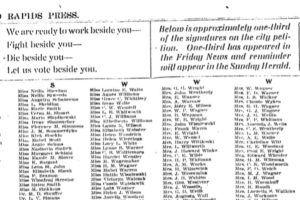 Genealogists don’t always look to mass movements to locate individuals, especially women–or consider taking the next step toward resource creation when they discover a forebear’s name in a group listing. This program will call for the creation of indexes akin to the lists of Civil War soldiers, to assemble armies of women, making them forever easier to find. It will illustrate the riches to be yielded beginning with participant lists from early women’s social movements on the local level. The records of early women’s organizations were rarely considered worthy of archival collections or even attic space; so there are often no minutes or correspondence files. But we know that disciplined searches of newly digitized newspapers can result in columns of the names of women who were committee members of local literary societies and WCTU chapters, as well as those who embarked on political activities and wartime work. (This program will look beyond the WWI women’s registration cards, so well known in Grand Rapids. But those 23,000 names represent only one wartime project.) Still, energetic searches of newspapers often stop short with the discovery of just one particular name–even when it is one among 14,000 others who published their names in support of women’s suffrage in 1918 Grand Rapids. This program will discuss the benefits of placing ancestor names into their rich and intersecting contexts, and the need to structure a process for doing that.

By profession a literary scholar, Jo Ellyn Clarey has redirected her path into the world of local women’s history in Grand Rapids, Michigan, where she has been tracking down the forgotten contributions of area women. For the Greater Grand Rapids Women’s History Council, she continues advancing long-term projects highlighting the roles of local women in the Michigan suffrage movement; overseeing a complete elective history of the city’s women; and organizing research on U.S. women’s immense, but little known, work during WWI. She has also served on the boards of the Grand Rapids Historical Society, the Grand Rapids Historical Commission, and acted as liaison to the Michigan Women’s Studies Association, whose statewide conference she has chaired. Clarey has presented at and organized programming for numerous institutions and academic conferences.