Join the Downtown Grand Rapids Inc., the Greater Grand Rapids Women’s History Council, the City of Grand Rapids, Lions & Rabbits and numerous community partners in a celebration of the Women’s Way Murals. Every Wednesday in September we will be holding a ribbon cutting to feature each completed Women’s Way Mural in downtown Grand Rapids. Along with the ribbon cutting these events will also include local artist performances, a video on the background of the women of the murals, and time to mingle with food and drinks! 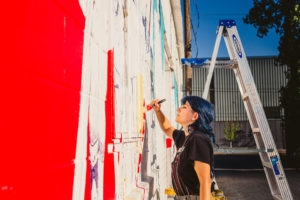 On Wednesday, September 29th from 7pm to 8pm we will be celebrating the Grand Rapids Chicks mural located in the alley off Newberry St. NW behind Auto Fixit Body Shop.

The All American Girls Professional Baseball League organized during World War II and fielded ten popular teams in the Midwest. The 600 women players suffered the rigors of the road as well as charm school, played in lipstick and slid into base in short skirts. The Grand Rapids Chicks played from 1945 to 1954, consistently appeared in the playoffs and won two championships. Their trading cards circulate again today because players, ignored by baseball history, took matters into their own hands and formed an association in the 1980s. Their efforts inspired the 1992 film A League of Their Own.

“This team is a local example of women’s perseverance through the hardships of World War II. Their story is about pushing through societal expectations towards the women who pioneered all-female teams in sports. Young women and men need to see female athletes from the past as they were — pioneers in the realm of professional athleticism that pushed through the obstacles they faced.” Statement by Artist Michi Farias.