Audio recordings and transcripts, mostly from the 1990s, are stored in the Grand Rapids Public Library archives and are accessible to the public upon request. A list of interview subjects and transcript summaries can be found, here. The following material has been shaped from one of the summaries, which are added to the website as they become available. 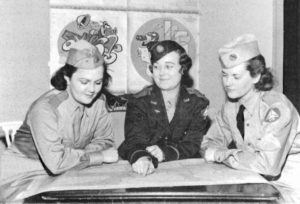 Marie Jay Cady (1903–1996) was a smart, outspoken woman best remembered for her long-time role as the executive director of the World Affairs Council in Grand Rapids. Cady’s vibrant early career in public relations provided the backdrop to many of her life accomplishments–in journalism, politics, and the Air Force, as well as the World Affairs Council.

Cady was born in Oklahoma territory on December 19, 1903, and grew up in Tulsa, Oklahoma.  She attended Stephens College, graduating in 1924.  After her first job with the Daily Oklahoman, she moved north to take a job with the Capitol News in Lansing, Michigan.  One fateful day a reporter from the Battle Creek Enquirer, Carleton Cady, stopped by the office to visit a friend. The Capitol News’ sports writer had just quit, and Carleton was offered the position. Soon after, Marie and Carleton were married and had one child that died in infancy.

During the Great Depression, the Cadys moved to Grand Rapids where Marie began her work in public relations for the Pantlind Hotel.  She described that job experience as “ fantastic.” Her duty was interviewing all the celebrities who came to Grand Rapids, including Winston Churchill, Nelson Eddy, and Amelia Earhart.

During this time, Cady was introduced into the world of Republican politics. Through financier Joseph Brewer, she worked on Alf Landon’s 1936 presidential campaign and handled Wendell Willkie’s 1940 campaign in West Michigan.

When at the onset of World War II Cady’s husband was called up to serve, Marie decided that “If he was in, I might as well be” and was commissioned as a second lieutenant in the Army Air Force. After she returned to Grand Rapids to run the Civil Air Patrol, she received a more  interesting post in public relations at Selfridge Field. This led to work in New York City, that made her Air Force career “unbelievable.” Cady arranged speaking engagements for eight combat pilots from the South Pacific at service clubs, women’s clubs, and schools to promote the Air Force movie Winged Victory.

After the war the Cadys settled again in Grand Rapids, though after Carleton died in 1961 Marie took a job in Washington with a Michigan congressional representative a few years later. While she enjoyed the work, she says the representative “turned out to be not very smart.” When he decided to run for the Senate, she informed him that “he wasn’t smart enough to be a Senator.”

So it was back to Grand Rapids. There, Gerry Elliot of the Grand Rapids Press hired Cady to run the local World Affairs Council. During fifteen years as its executive director, Cady did not receive a pay check. In fact, she paid all of her expenses! But she enjoyed the work and would travel to Washington twice a year to line up speakers. Under her leadership, the World Affairs Council grew to 200 members; but Cady quit abruptly when the Council offered a large salary to a man interested to run it.

Overall, Cady described her life as “lucky,” adding that she always returned to Grand Rapids because “there wasn’t a more interesting place to live.”  She was just as interesting in her own right, and her colorful life contributed greatly to this city’s rich history until her death on March 7, 1996.

Also notable is Jane Hibbard Idema (1921–2006). Not only was Jane a founder of the Greater Grand Rapids Women’s History Council in 1988, she also served in the American Red Cross in the European theater.

From the Grand Rapids Historical Commission, an interesting look into the role of a military nurse from Grand Rapids, Joy M. Lillie.

Twenty-two year old Joy Lillie began her service as a member of the U.S. Army Nurse Corp during WWII on April 1, 1943. She could not have imagined that she would be climbing the bluffs of Normandy searching for wounded soldiers six days after the landing at Omaha Beach, June 6, 1944. Lillie and 17 other women in her platoon were on the front lines of every major campaign in Europe: Normandy, Northern France, Battle of the Bulge, Rhineland, and Central Europe. Her medical team advanced as the battle moved forward. They were never farther than three miles from the front line. Joy recalled the time they got too close to the front and the whole platoon spent twelve hours in a ditch waiting for the fighting to stop. The 51st Field Hospital’s tents and cots could be relocated to treat the wounded. “We got used to the sound of the airplanes, the bomb, the fighting” she says. “I was brave in those days. The idea was to get as close to the front lines as possible, do the repair work, and send them to the evacuation hospitals as soon as possible.”

Notes from a program offered on November 10, 2016, at the Grand Rapids Public Library: “ACs, WASPs, SPARs, and Marines: Nicknames, Recruiting, and the Wartime Experience of Servicewomen from Grand Rapids.” Presented by Will Miner.

The Greater Grand Rapids Women’s History Council was pleased to provide the November 10th program of the Grand Rapids Historical Society. The Grand Rapids Public Library’s Will Miner highlighted the WWII experiences of local women Marines to illustrate the first large-scale employment of women in the United States armed forces. 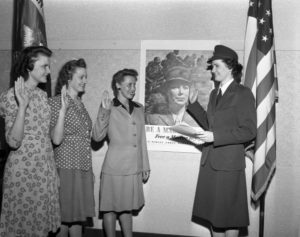 Having committed their entire societies to the Second World War effort, warring nations lost fifty to eighty million people while tens of millions more were wounded or taken ill. Such losses led both Allied and Axis nations to employ more women than ever before as workers, nurses, clericals, and auxiliaries. Some countries also used women in combat roles.

Early on, geographical location allowed the U.S. to resist the idea of women in the military, so American women were invited into military roles relatively late. The argument of proponents of women’s service–that having women fill non-combat jobs allowed more men into combat units–prevailed in early 1942, near the peak of Axis success when the cost to the Allies was very high. Initially, the armed services were unwelcoming, but women were first accepted by the Army, later the Navy and Coast Guard, and finally the Marine Corps.

Using their portrayals in the media, how women were recruited and trained, and even the nicknames they were given, Miner will illustrate women’s struggles for acceptance. Though their integration continues to the present, the Second World War can be viewed historically as when women were finally accepted into the armed services of the United States.

This presentation highlighted the record of struggle in Grand Rapids and examined how, though being the most resistant of all the forces, the Marine Corps ultimately became the most progressive branch of the armed services in its acceptance of women.

Will Miner served in the U.S. Marine Corps from 1992 to 1996 and is currently a library assistant in the archives of the Grand Rapids Public Library. A 2003 graduate of GVSU, he earned a Masters in Library and Information Science from Wayne State in 2013.