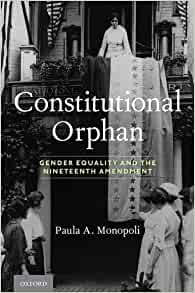 The ratification of the Nineteenth Amendment in August 1920 represented a significant movement in American history. It promised women in our republic change in their political, civil, and social statuses. What followed was a decade of dispute among women’s movements, emerging from it a thin conception of the Nineteenth’s constitutional meaning as a nondiscrimination rule in voting. Why did this thin conception prevail over a broader one that included equal citizenship and gender equality? Moreover, what is the lasting role of the Nineteenth in the Constitution today?